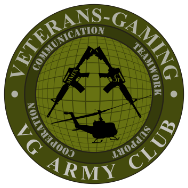 
Join the VG Army!  Casual Open Public Group for those who play games like Project Reality, SQUAD, and Arma 3, and play on VG game servers primarily, as well as other games on occasion.  A first step in the path to =VG= Clan Membership!
(for our VG Game Servers)

Please post up and introduce yourself!  This group is open to everyone who plays games here, of any skill level, and progression within this club can be earned over time.

Anyone may join this club, even untrained players, just agree to the rules below: