Profile for  VoiceAttack
by =VG= SemlerPDX

These commands use VoiceAttack to translate the in-game on-screen radio menus from AWACS through Tanker into natural and intelligent voice command phrases that will fire keypress macros to help keep hands on the throttle and stick, and maintain immersion.  As an additional option, these commands can be locked behind a push-to-talk mode bound to your UHF/VHF transmit buttons in-game, allowing any other VoiceAttack command unrestricted access if needed, while still restricting these BMS radio command macros.  Finally, this single advanced control profile is extremely easy to edit or integrate into other profiles.

At VETERANS-GAMING, we fly with friends or AI Pilots, or a mix of both on our 24/7 Public Korean Campaign in Falcon BMS. We may go out with an AI wingman only to have a friend take their place mid-flight.  For this reason and others, I created this VoiceAttack profile based around restricting when the computer can execute keypress macros that match voice phrases, having to first check if that pilot was set to a human pilot and therefore disregard commands for that pilot.

Thanks to user requests during the beta, there is now an optional mode to reverse the Human Pilots system, to assume all pilots are humans unless told otherwise, and also a system to choose a different keyboard layout than QWERTY.  I have also added an optional Audio Feedback Mode to play a short radio cue sound when a command is successfully recognized.


Included is a single profile that handles every callsign and radio command variation in Falcon BMS, with instructions on how to add any custom callsigns to the single profile. The focus of this profile is only on the in-game Radio Menus, and creating an immersive interaction layer through VoiceAttack that is easy to manage and update, or integrate into other Voice Control systems for Falcon BMS.  My goal was an intuitive system, so there is no user manual - only a few infographics and quick reference pic of all the radio commands.  I personally keep that final pic on my tablet for reference when flying, to find radio commands I seldom used in the past when they were more difficult to access while busy with HOTAS in the pit.


Say goodbye to the keyboard, and enjoy the immersion! Cheers!

Tips for this profile: 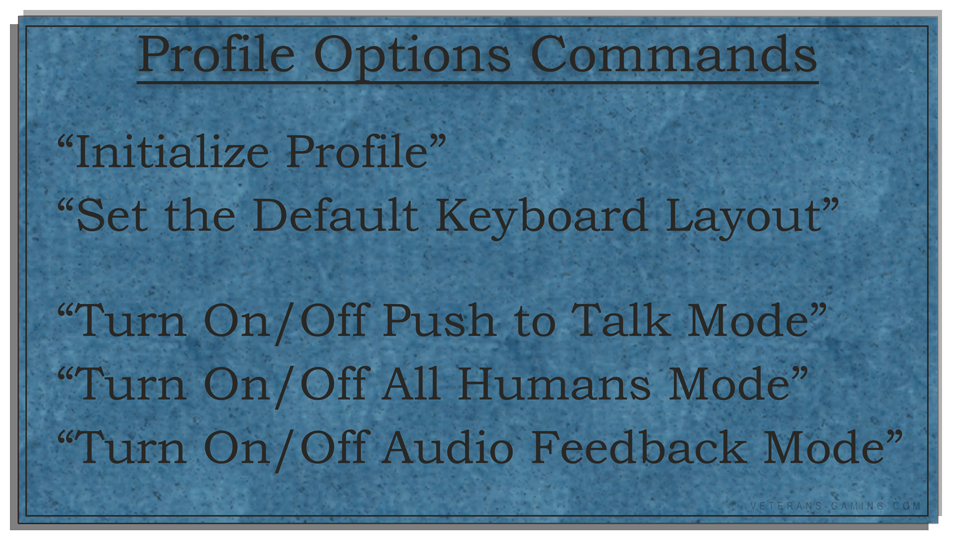 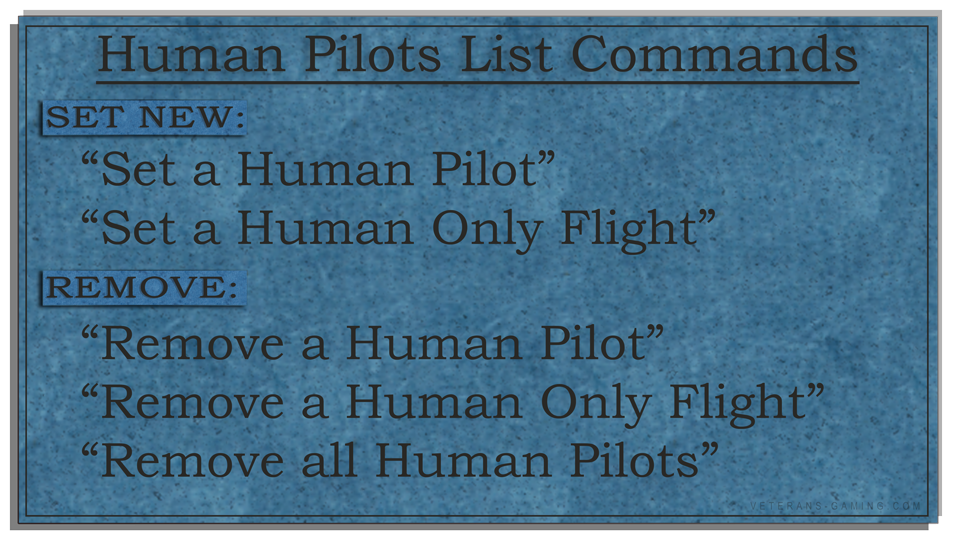 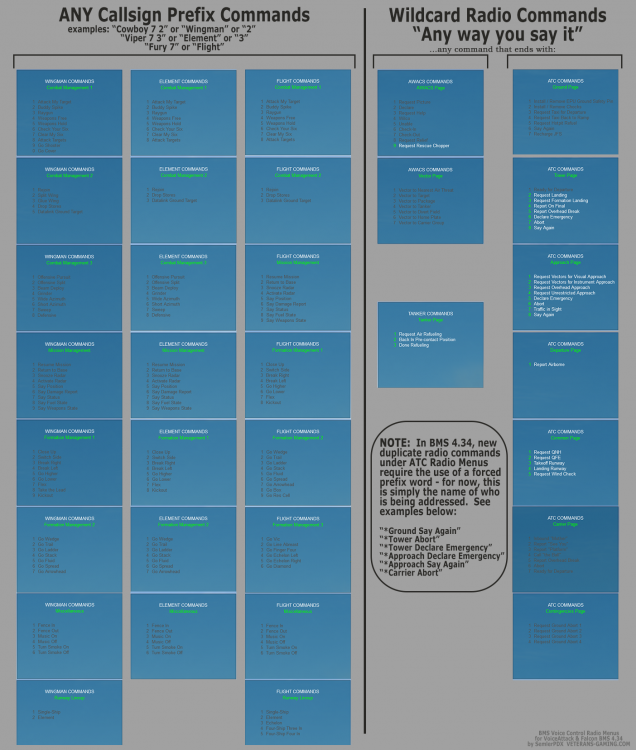 Just a simple hotfix for a bug found by Wheelchock, the standard "Ready for Departure" command was getting overwritten by the variable for the new "Carrier Ready for Departure" command added for the new U1 update for BMS. As a result, this command will call an Abort by attempting the same input key as the carrier departure. Basically, everyone does need this hotfix, can't be avoided.

Anyone can easily fix this themselve inside their own profile, if you already have v1.2, and you don't want to bother importing this new version - just open the command labeled,
"KEYPRESS_Variables →→→((ADJUST AI COMMS LISTS & KEYS USED BY THIS PROFILE HERE))←←←" and scroll down to the ATC Variables section, under the Carrier Page section,
you can change the #7 variable from "Set Text [KEY_ATC_ReadyForDeparture] to '7'" to "Set Text [KEY_ATC_CarrierReadyForDeparture] to '7'", and apply changes.

Falcon BMS 4.34 has just released Update 1, and with it has come some serious improvements and additional features.  For this profile, and the in-game Radio Menus in general, all that has changed is an addition of a "Ready for Departure" call as the 7th choice on Page 6 of the ATC Radio Menu.  I have added that command to the profile, but as it does conflict with the default "Ready for Departure" command, this Carrier specific command will need to be preceded by the word "Carrier" as a forced prefix word (see note in the large Command Reference pic).

Example use:  "This is Joker 7-1, Carrier Ready for Departure"

I've also added a bit of polish to the Audio Feedback system, allowing it to recognize the word "feedback" as two words, "feed back", to help us avoid repeating ourselves to get the commands to fire, as well as a null check on the Stereo Audio Feedback output channel, so it can recover if this saved setting is lost.  I've also updated the minimum version of VoiceAttack, so please be sure to update your VA program.
We've tested this version, just minor additions, and everything seems great - but let me know if any issues pop up!  Happy New Year!

v1.1 Patch has been released

A small bug has been identified and removed.  This issue prevented the entire Human Pilots Registry system to function and should have been caught before the final release version.  All apologies to everyone who has been trying to use this new voice program.  In addition to this, I've decided to not use a wildcard to catch the name of the BMS program to send keypresses to, and have gone for the "Falcon BMS.exe" method.  Still, this will not catch every user, and players will need to test to be sure commands go through initially, and refer to VoiceAttack troubleshooting (and those tips we've highlighted already) to get commands to fire in the correct window.  I'm happy to help new users, and the community has been helpful as well.  Any questions, feel free to ask!

Again, any issues feel free to let me know!

Please download updated final version!  Link below and updated in the main post above!  You don't have to remove the old 0.99 beta profile, but it is recommended to not use both at the same time or variables may get messed up.  Thanks to everyone for helping to finish up final testing!

SitRep:
I've finished with all final additions and proposed changes, and all known bugs and issues have been resolved.  We've tested quite extensively to try to break things, and it seems fairly stable.  The final version can be found in our download section, please rate and comment if you like and share this link if you can (click here).  There is now an Audio Feedback Mode that can be turned on or off at any time.  It plays a short sound when a command is successfully recognized, to save time and help avoid the frustration of not knowing if we have to repeat a command.

I've given the option to have the Audio Feedback sound effect to output through stereo left, right, or center channel(s), and this is set when you turn the mode on.  It is a radio cue up type sound, but a bit distinct compared to the ones in BMS to help differentiate feedback.  All three sound files are very tiny, and are included in a VoiceAttack Profile Package for easy importing into VA, and will be placed in folder in the VoiceAttack program folder under Sounds automatically when the profile is imported.

Finally, there is a single Variable Pause in the KEYPRESS_Variables command that controls the time between a keypress and release for every action in the profile.  Default is 50ms, and if a user has any issue with the keypress macros firing buttons too fast for their computer, this number can be increased slightly to slow down the system and fix any issues.


Huge thanks to everyone who helped out with comments, feedback, bug reports, and testing - I'm very happy with how well this profile has been developed, and I have a feeling it will be a solid tool for years to come!  I'll support any changes for future BMS versions, and will try to respond to any questions about this profile.

Here's a copy of the changelog:

Any problems or new bugs, or brilliant ideas, feel free to drop some feedback!  Cheers!

Please download newest version!  Link updated in the main post above!  You don't have to remove the 0.98 beta profile, but it is recommended to not use both at the same time or variables may get messed up.  Thanks to everyone for helping to finish up final testing!


Per request, to speed up the interaction of adding/removing pilots from the exclusion lists, you can now say the entire Callsign + Flight Number + Wing Number when asked for the callsign.

This will jump to the confirmation at the end of the command and greatly reduces the time spent interacting with the voice control system configuration.   During my testing, I found there must be a clear separation between the Flight Number and Wing Number when spoken, to avoid "Cowboy 7 3" getting recognized as "Cowboy 73", and your own results may vary.  Please test and let me know.  The old system is still in place, and you can even just say the Callsign + Flight number, and it will notice and skip to the Set Wing Number segment of the script.  The entire idea was to allow a lot of options to recognize how we speak, and the only catch is that we need to enunciate and keep succinct breaks between words for this style of input.  Further beta testing in this final 0.99 phase should help judge if this will work or if it needs adjustment.


Additionally, there are now VoiceAttack command log notifications whenever the profile loads showing the current profile settings, and also voice notifications if either PTT mode or the new All-Humans mode are On.

Here's a copy of the changelog: