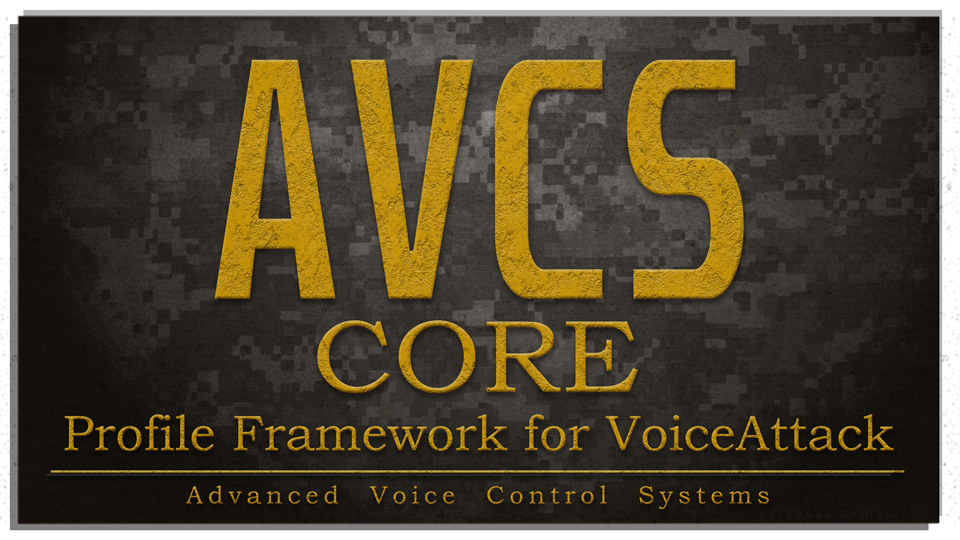 Profile for  VoiceAttack
by =VG= SemlerPDX

AVCS CORE is the new framework for any VoiceAttack profile I release in future, and provides awesome tools to any VoiceAttack user.  It can be used alone and by itself, or as a base to build a VoiceAttack profile around, including its functions in your own creations.  The Quick Command Creator cannot possibly replace the very easy and very powerful voice commands we can create through VoiceAttack in the standard fashion, but allow users to quickly create simple keypress commands for a phrase, or even advanced multi-step macros that can use a limited selection of common VoiceAttack actions.  The very fun Voice Authorization System lets us create passphrases that we can gate a QCC Command behind, for example, "Execute self destruct mode", 'command code required!', "Picard 4 7 Alpha Tango", 'confirmed'.

I've even created a special home page and forum section here at the VG website, and a channel in the VG Discord, to provide Help & Support for the many users of my profiles - with voice controlled bug reporting to make it easy to let me know when I need to fix something.

As I plan to release more and more VoiceAttack profiles for various games, I needed a framework to standardize my methods, and to help keep profiles used by other people up to date and in proper working order.  I never quite expected such a large user base, and with that I've decided to offer much more direct support through in-profile options menus and help & support options that tailor themselves to whatever AVCS4 profile is active.  By checking for just 8 bytes of an update number on the VG website when loading, AVCS CORE can provide a pop-up choice for users to view the latest changelog, apply the latest patch (or open the website to download a new major update version), or just postpone until later.  I've even included an option to turn off minor patch update prompts, and to roll back to the last version if desired!

The purpose of this profile is to function as the backbone of any AVCS4 game profiles I release, such as the current AVCS4 Falcon BMS Radios profile, and provide users with a host of profile and update controls.  When AVCS CORE is first loaded by VoiceAttack, it will initialize itself and any other AVCS4 Profile that is switched to, bringing its full list of commands into the end game profile.  This includes the Quick Command Creator and Voice Authorization System, with new commands or codes saved to the Active Profile's save file.  Any other AVCS4 Profile that gets switched to will clear and re-load its own QCC Commands or VAS Passphrases (if any), working out of it's own save file as well.

Included is the AVCS CORE profile package that includes the AVCS CORE Profile designed for VoiceAttack, as well as the optional AVCS CORE Framework blank Template Profile for VoiceAttack profile builders.  To keep AVCS CORE startup fast for any AVCS4 Profiles, commands cannot be added directly to the CORE Profile, so the Template is available, and can include all of the functionality of AVCS CORE by including the CORE profile commands through its profile options.  This profile will have its own save file and config files folder in the VoiceAttack Apps folder along side other AVCS Profiles data.  Since AVCS CORE needs to load before any other AVCS4 Profile (including the AVCS4 Template Profile), it will be updated the least, and has been tested the most over the past 7 months of development.  I will continue to support all AVCS4 Profiles through AVCS CORE and its powerful profile control options.

Say goodbye to the keyboard, and enjoy the immersion! Cheers! 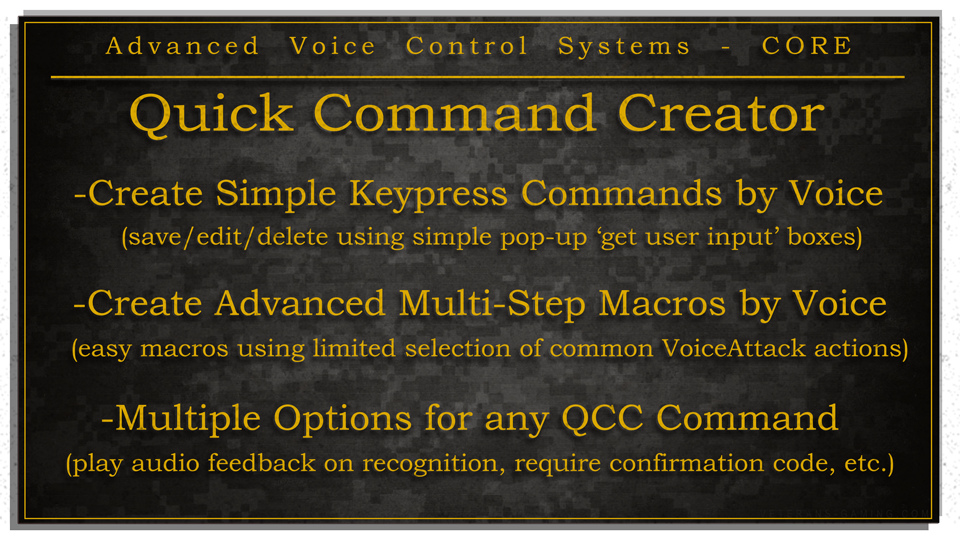 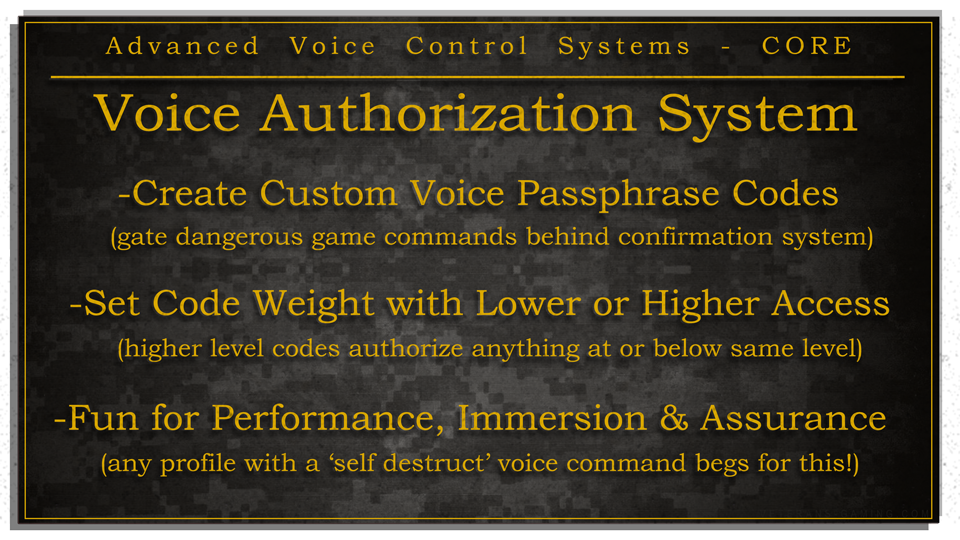 *The optional Push-To-Talk mode is disabled by default.  Say, "Turn On Push To Talk Mode" to enable
**Follow Instructions inside profile to set Push-To-Talk buttons to keys or joystick buttons if desired

I will be running a Public Beta Test for AVCS CORE and AVCS4 Falcon BMS Radios (1.3.91b), and users are encouraged to try out both, or just AVCS CORE and its included Template Profile, if desired.
Please use the voice command "Open Help and Support Menu" to communicate any bug reports.  These help menus can be expanded without new profile versions, so suggestions are welcome.
Thank you for checking out AVCS CORE for VoiceAttack!

Tips for this profile: 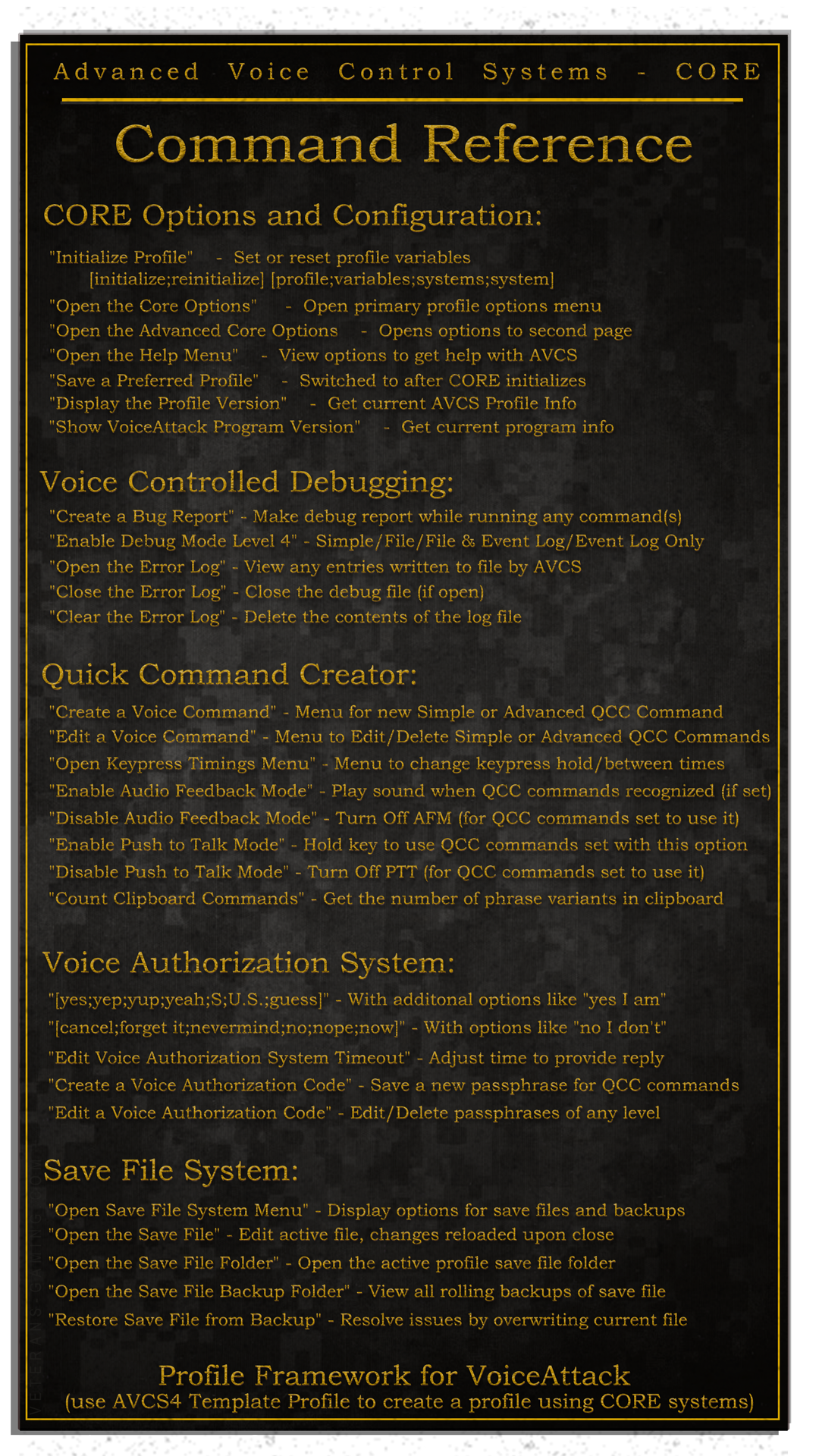 I have fixed the issue with international decimal separators, and everything should work well now for all users.  Initialization optimization has been a large focus of this update, especially when using CORE alongside AVCS4 Falcon BMS Radios.  Users will need to download this new version of the profile to take advantage of the updates and fixes listed below.

Thanks for your patience during the beta test rounds here, again, the end goal for AVCS CORE is to be a stable un-changing profile that can handle profile management for any new AVCS4 game profile I create in the future without needing updates itself, and I think we're well on our way to that.  Cheers!

Please be sure to download the AVCS4 Falcon BMS v1.3.92b Profile (if used), this updated changed the AVCS CORE function commands inside AVCS4 BMS, too...

Due to some initial issues right off the bat, it seems the concept of having some AVCS CORE functions outside the profile itself as part of an App for VoiceAttack would have included a bit more work, but more importantly increased the profile package size from around 1MB to over 25MB, and it's just not worth it.  The idea was specifically for things like my Save File Sort function that orders the lines of the save file into a readable alphanumeric sorting, where AVCS4 module specific entries were properly grouped together (like saved Quick Commands or VAS Passphrases), and any new AVCS4 profile such as Elite Dangerous could introduce new sorting rules by simply including a new version of the AVCS_CORE App for VoiceAttack in it's profile package.  This would have removed the need to update the base AVCS CORE profile that all AVCS4 game profiles rely upon anytime I wanted to modify those game-specific functions.

I've done away with the app completely now, and recreated the simple functions like sort and initialize as inline functions for VoiceAttack.  This requires everyone to download a new version of AVCS CORE and the AVCS4 Falcon BMS Radios (beta) profile if currently used.

Thanks for your patience during the beta test rounds here, the end goal for AVCS CORE is to be a stable un-changing profile that can handle profile management for any new AVCS4 game profile I create in the future without needing updates itself, and I think we're well on our way to that.  Cheers!

Please be sure to download the AVCS4 Falcon BMS v1.3.91b Profile (if used), this updated changed the AVCS CORE function commands inside AVCS4 BMS, too...