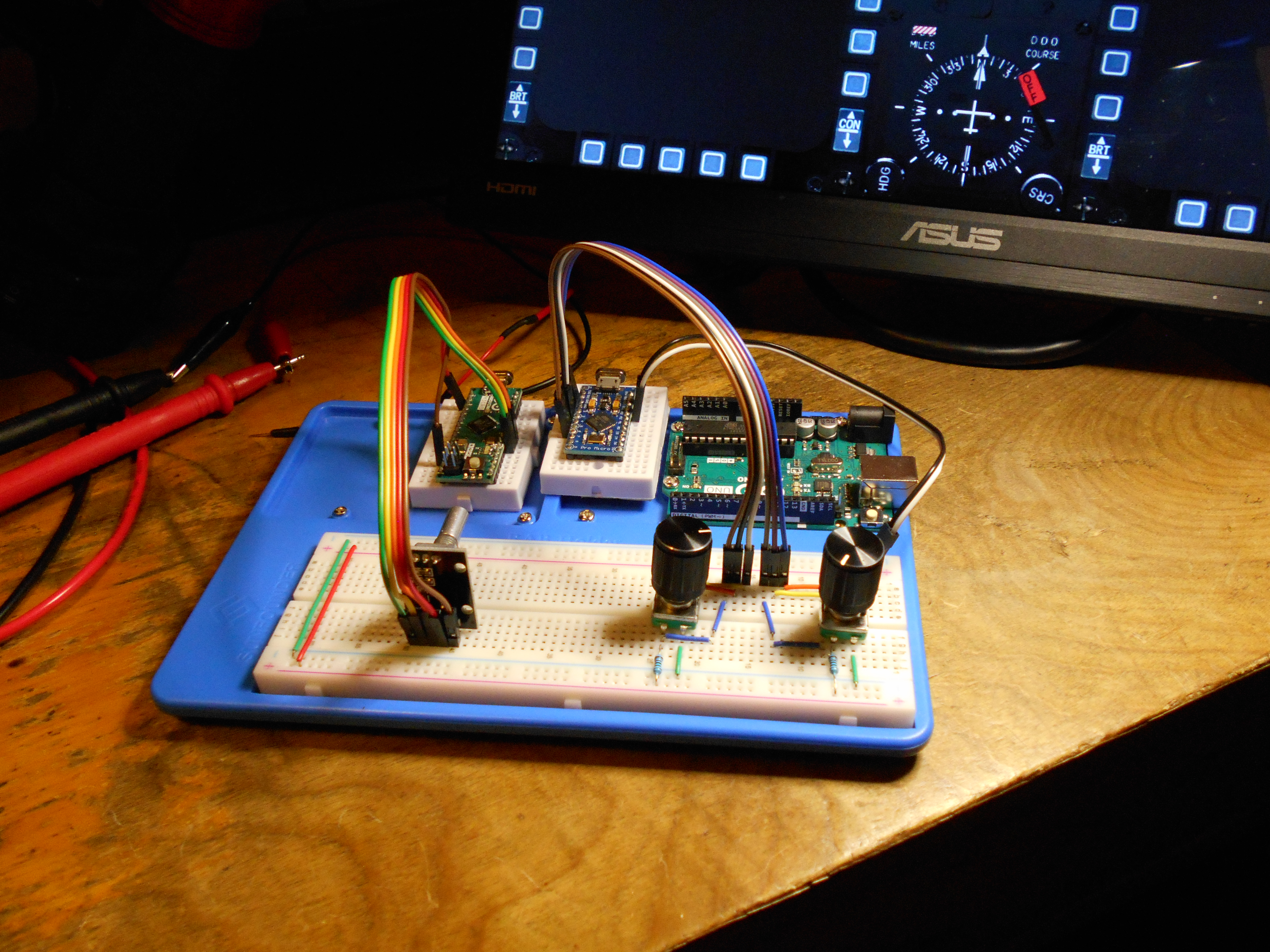 I have a touch screen monitor below my main one when I fly in flight simulators like Falcon BMS or DCS or Microsoft Flight Simulator.  It's great for the MFD buttons, as opposed to the actual wired USB Thrustmaster MFD's physically attached to the screen like I used to have, and I can use the monitor for other things, too.  But one thing I would love to have attached to the screen would be the Course and Heading knobs of the HSI (horizontal situation indicator) .

It would need to be removable so I can store it when not in use.

I've heard about a micro-suction tape that can stick to anything smooth and flat without leaving a residue or losing stickiness, so this is a good excuse to buy some and play around with sticking things to my monitors.

← On the left is the (green) Arduino Micro board I used to test the concept with a rotary encoder on a breakout board, where I wrote the initial sketch with the Joystick and Encoder libraries.  Later, because I didn't want to sacrifice my Arduino Micro to this controller, I bought a 3 pack of these much smaller Sparkfun Pro Micro clones for fifteen bucks (blue one in the middle).  That one is gonna stay there for future tests and such, they'll be the heart of many projects in the future since they cost so little and include so much!


The initial goals I had for this project were: 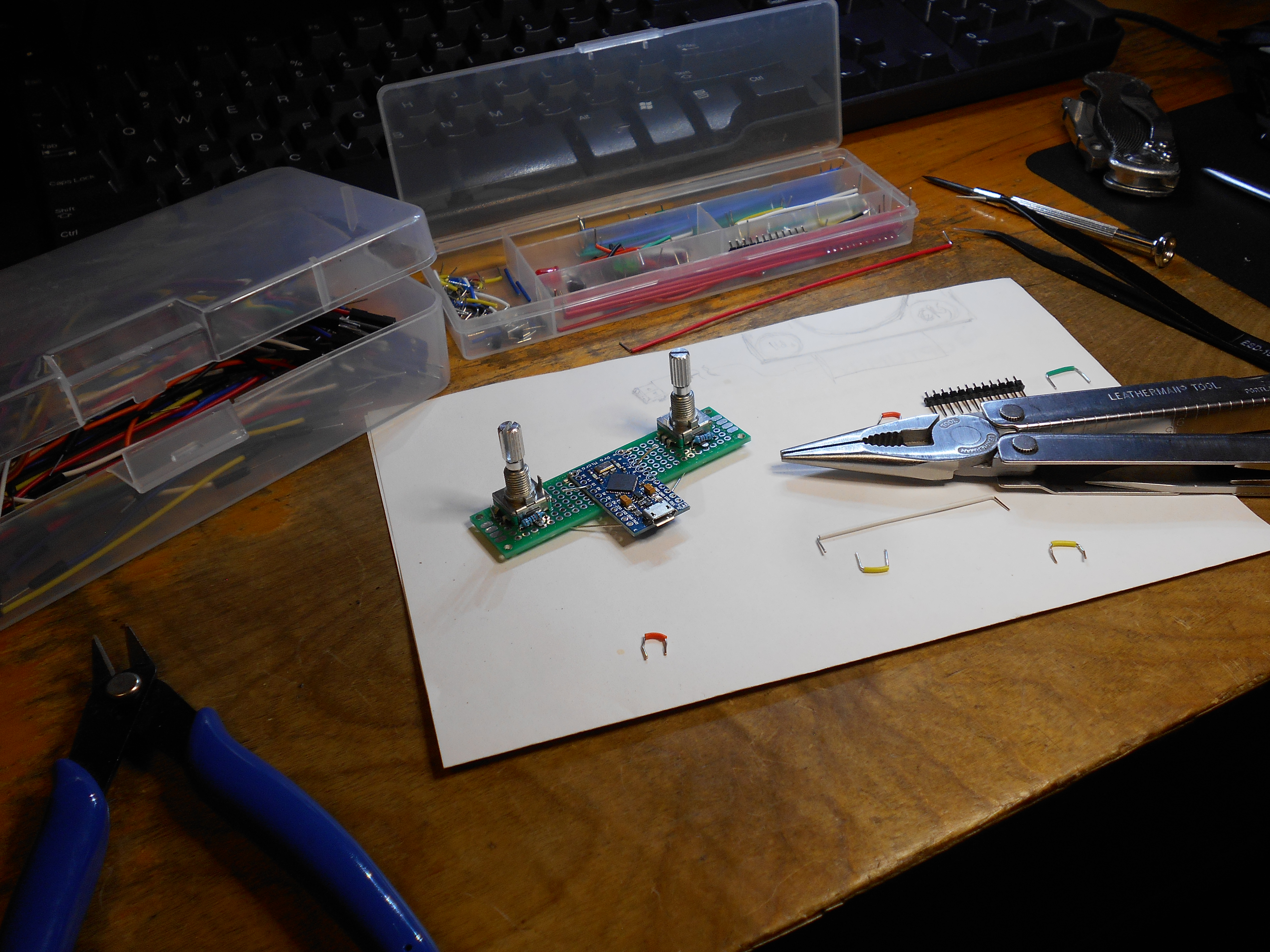 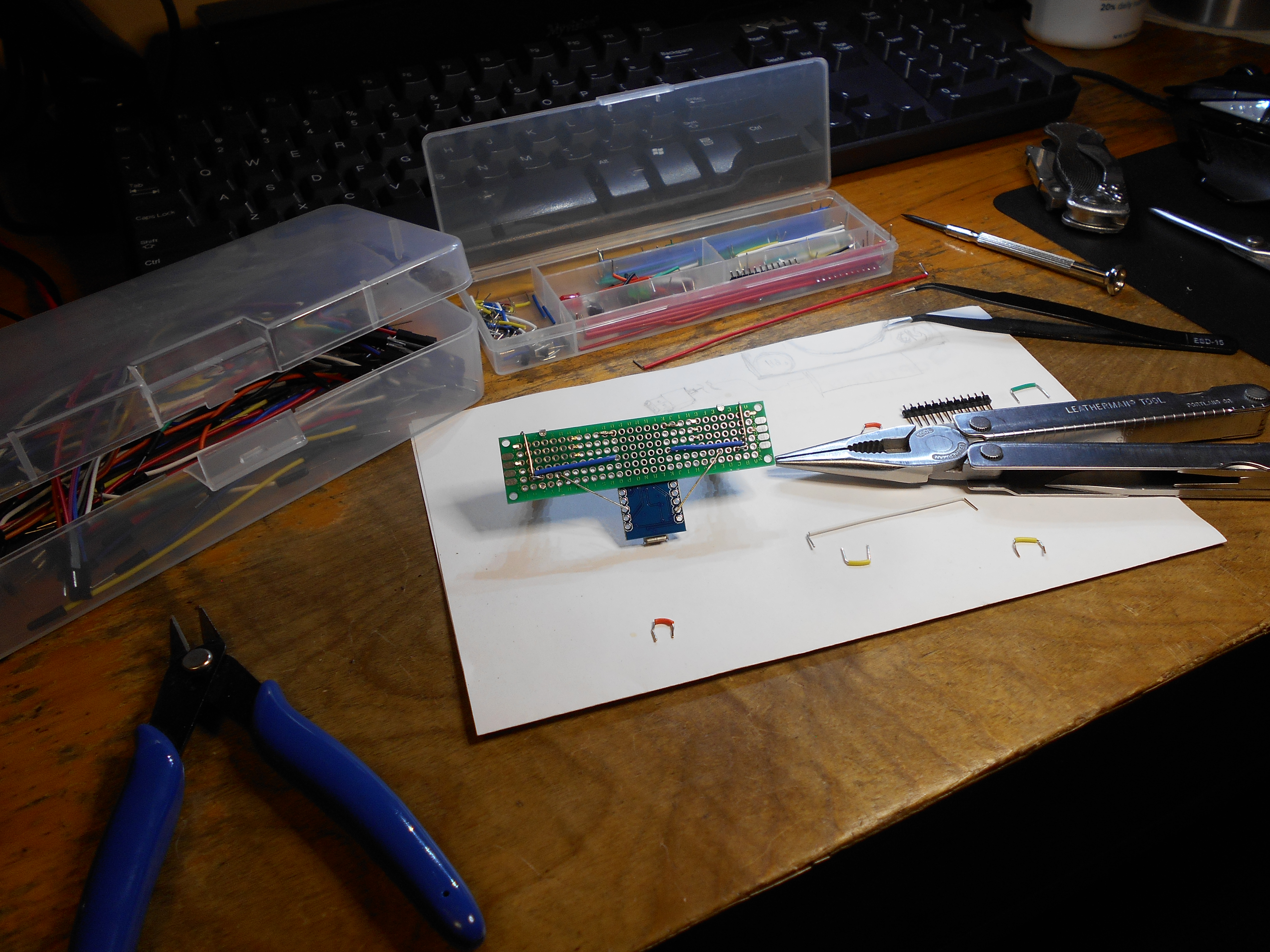 First, I affixed the Rotary Encoders and the Pro Micro clone to an 8cm x 2cm prototype PCB with a couple header pins bent outwards and crimped down, and with the two blue solid copper switch wires soldered in place from the top. I also ran the 10k Ohm resistors for the switches now.

These are for the push buttons built into the rotary encoders, and although they only have two pegs on the actual component, they require three wires from the controller board (ground, 5 volt power, and the blue switch wire going to the Pro Micro). All this added plenty of structure. There is no wiggle or play, I'm not gonna try to break it, but it is very rigid now. 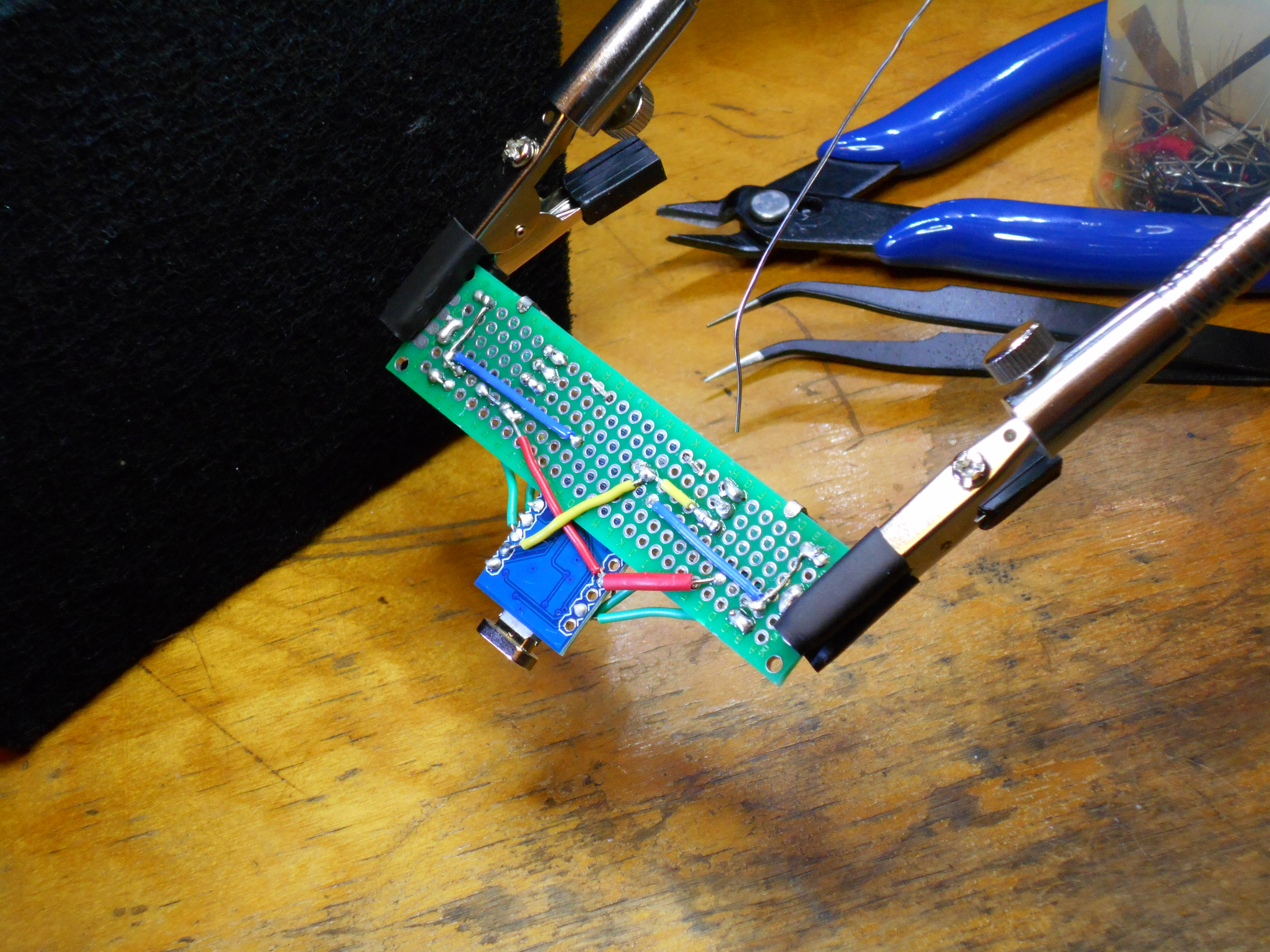 Here's a close look at the first stage of soldering. (okay, don't look too close) I don't have the highest quality tools or solder, or even a lot of skill and experience at this, but it's good enough -- and good enough should always be good enough for a DIY project for personal use.  If I wanted to, I could order a custom circuit board if I was going to make a bunch of these, but I'm happy as it is.

It is so cheap to buy some of this stuff, if you messed up, you can always just buy another.  Those Pro Micro controller boards cost about as much as a value meal at a fast food joint, so you can literally afford to make mistakes as you learn even if you're on a very tight budget like I am. 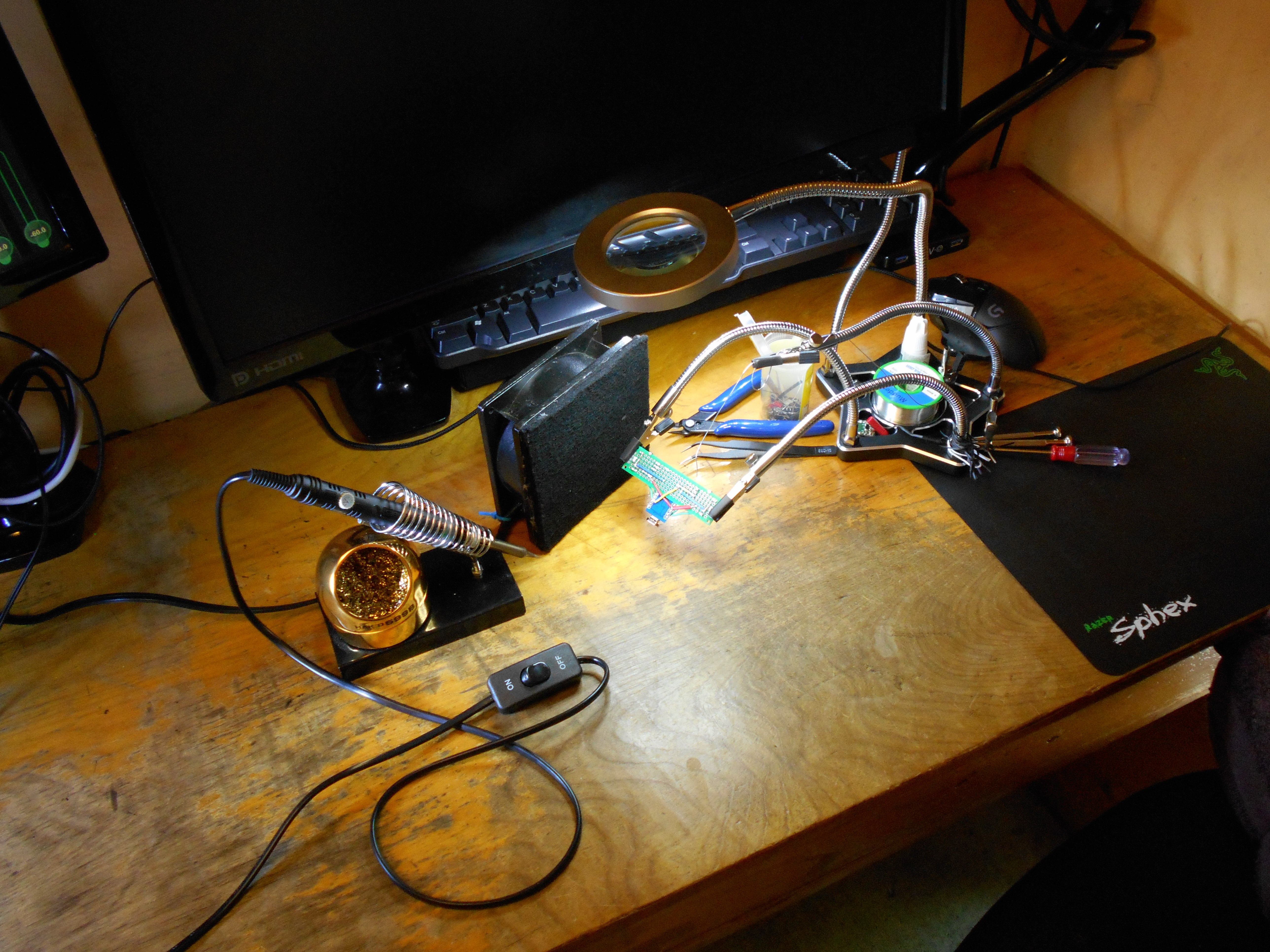 A homemade carbon filter fume extractor, a simple soldering iron with a power switch and a temperature controller, some handy dandy helping hands and that brass soldering tip cleaner make little projects like this very easy, and all these items together costs less than the Logitech mouse to it's right. Good enough to play.

If anyone reading this has any idea to get into working with things like this, my advice is to jump right in, get the most basic stuff you can get, not the cheapest, but things with good reviews from some good online store like Amazon, Sparkfun, Adafruit, etc. 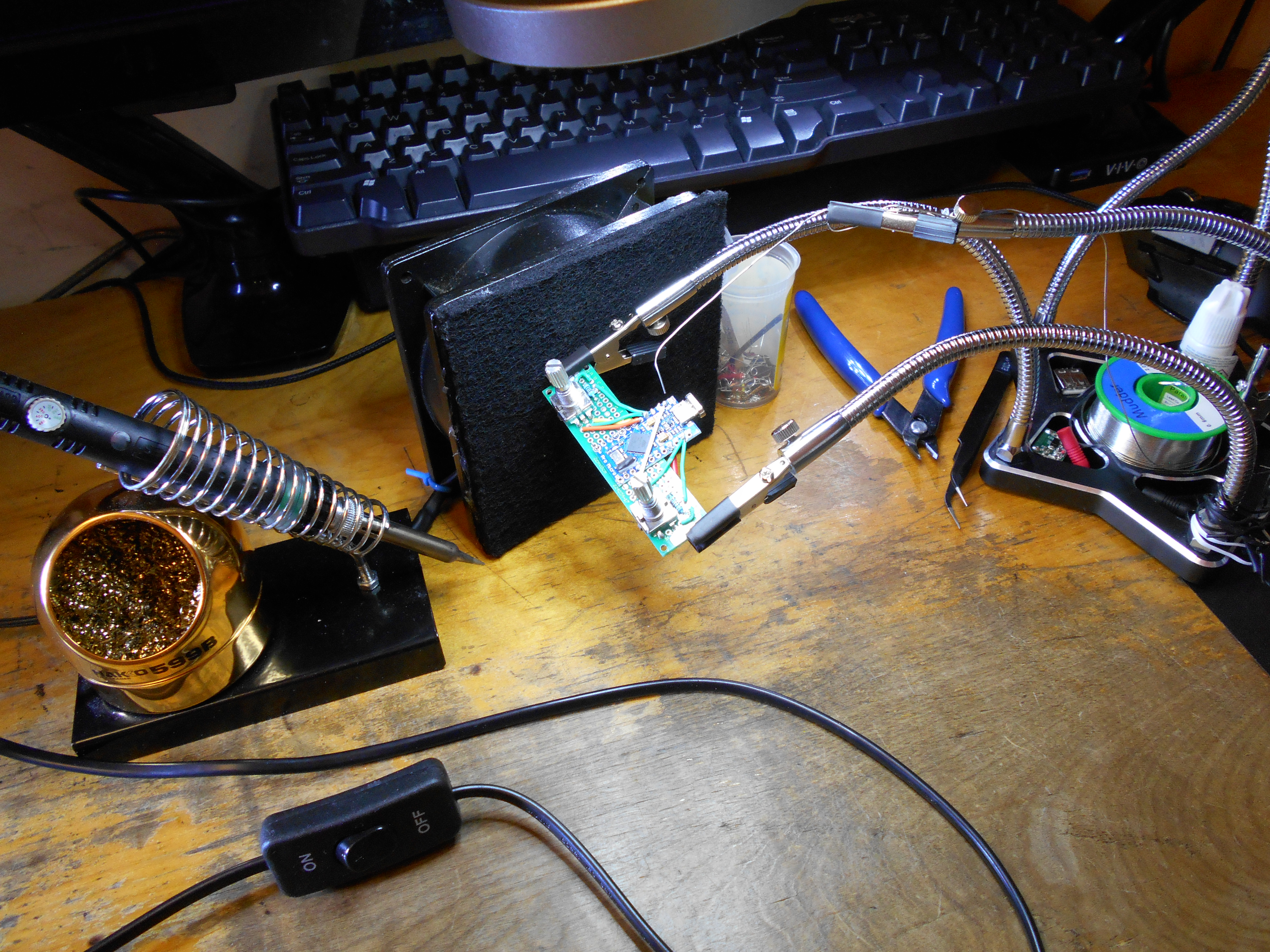 Soldering the top side here, used one of the helping hands to hold a string of solder from the spool. When I'm dealing with tiny bits that are between 0.5mm-2mm, anything that helps is appreciated. One slip and this 225C soldering iron would burn through any one of those tiny chips or components on the board. I find myself holding my breath and doing one or two, then letting go for a sec. I had to redo a few, and I always wait for it to cool down so I don't transfer too much heat to this poor little board.

I had a few bits of solid copper wire with colored insulators, from a breadboard jumpers kit, so I cut some to length, but used others as is. This resulted in an odd looking crossover of the Orange and Yellow wires, but they are not taller than the micro USB port on the other side of the board and that's fine. 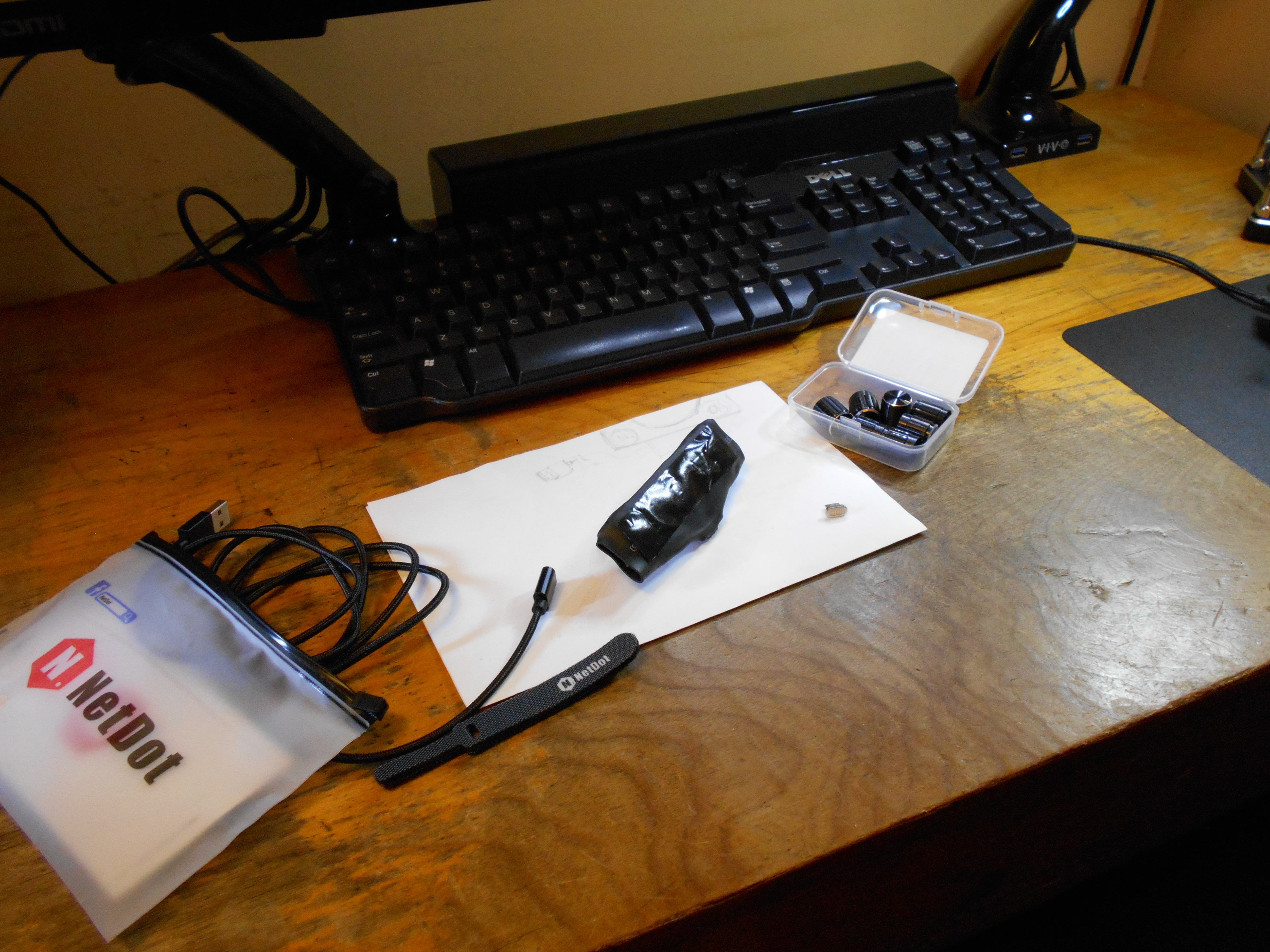 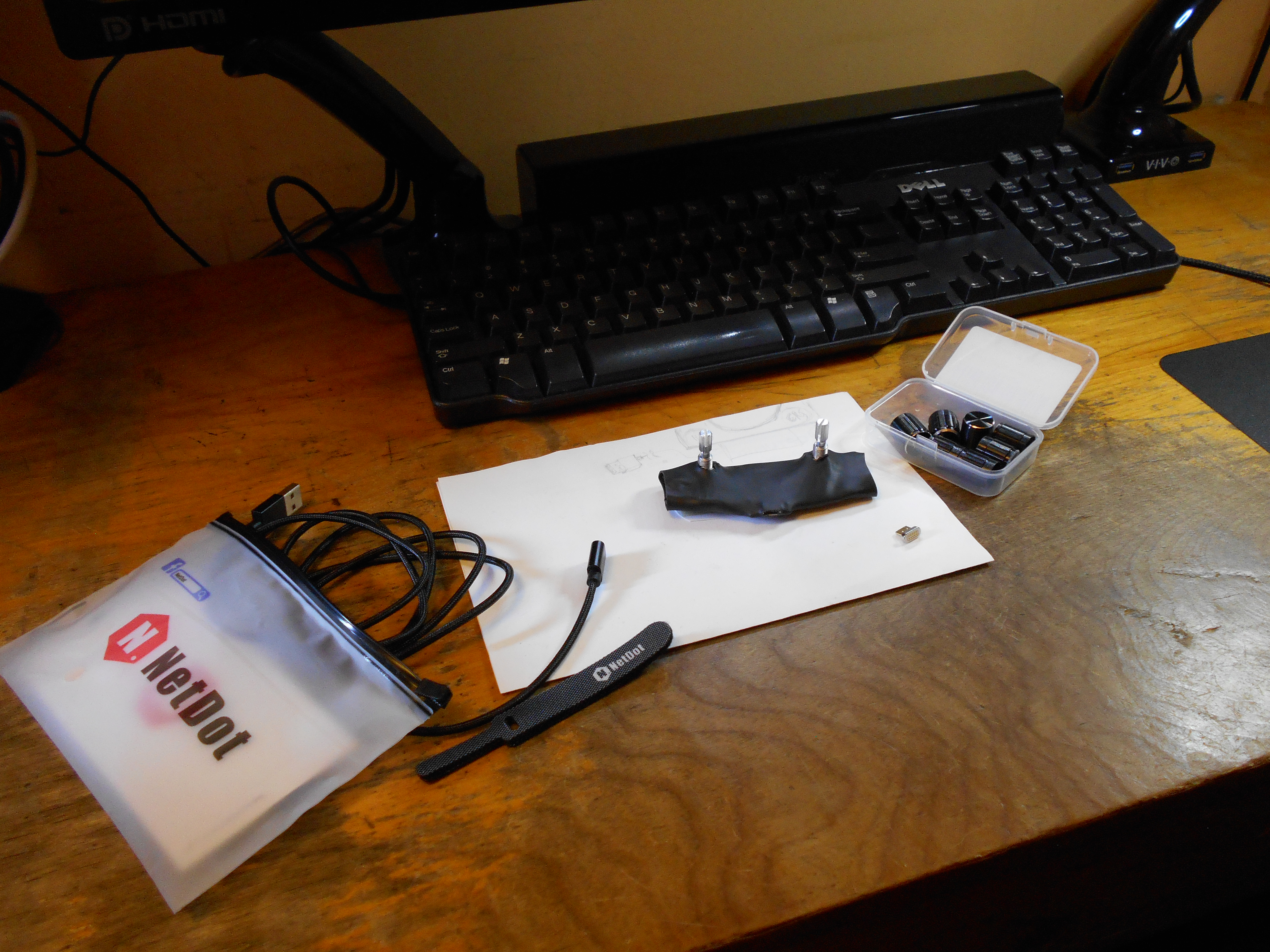 Once I was all done, I tested every connection for continuity and unintentional bridges, and it all checked out, so I encased it in shrink wrap.  By some sort of miracle, it works, it looks decent, and I think that will do just great!  I connected it to the computer and uploaded the sketch, which I had to modify slightly since I used a few different pins for the push buttons on the rotary encoders, now at pins 15 and 6 instead of 6 and 7.

I am thoroughly hooked on these NetDot magnetic adapters.  When I looked at the reviews for Pro Micro boards, one of the only issues I saw that I'd be concerned with is accidentally popping the micro-USB port off the Pro Mini board if dropped or yanked too hard.  A magnetic connector completely eliminates this issue, as well as the standard wear and tear issues that plugging and unplugging creates over time.  And they're as cheap as regular braided USB cables, too.  Why not? 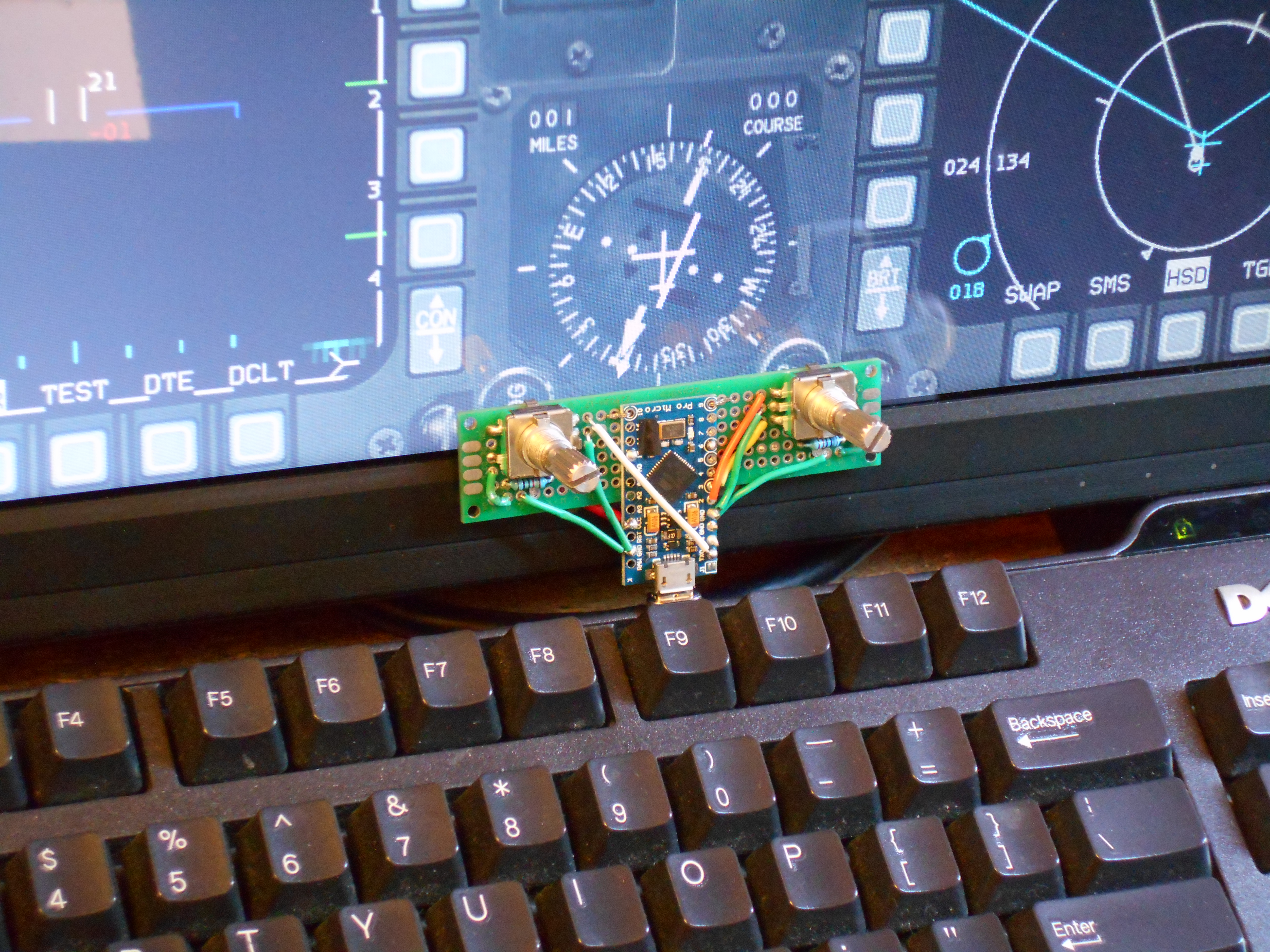 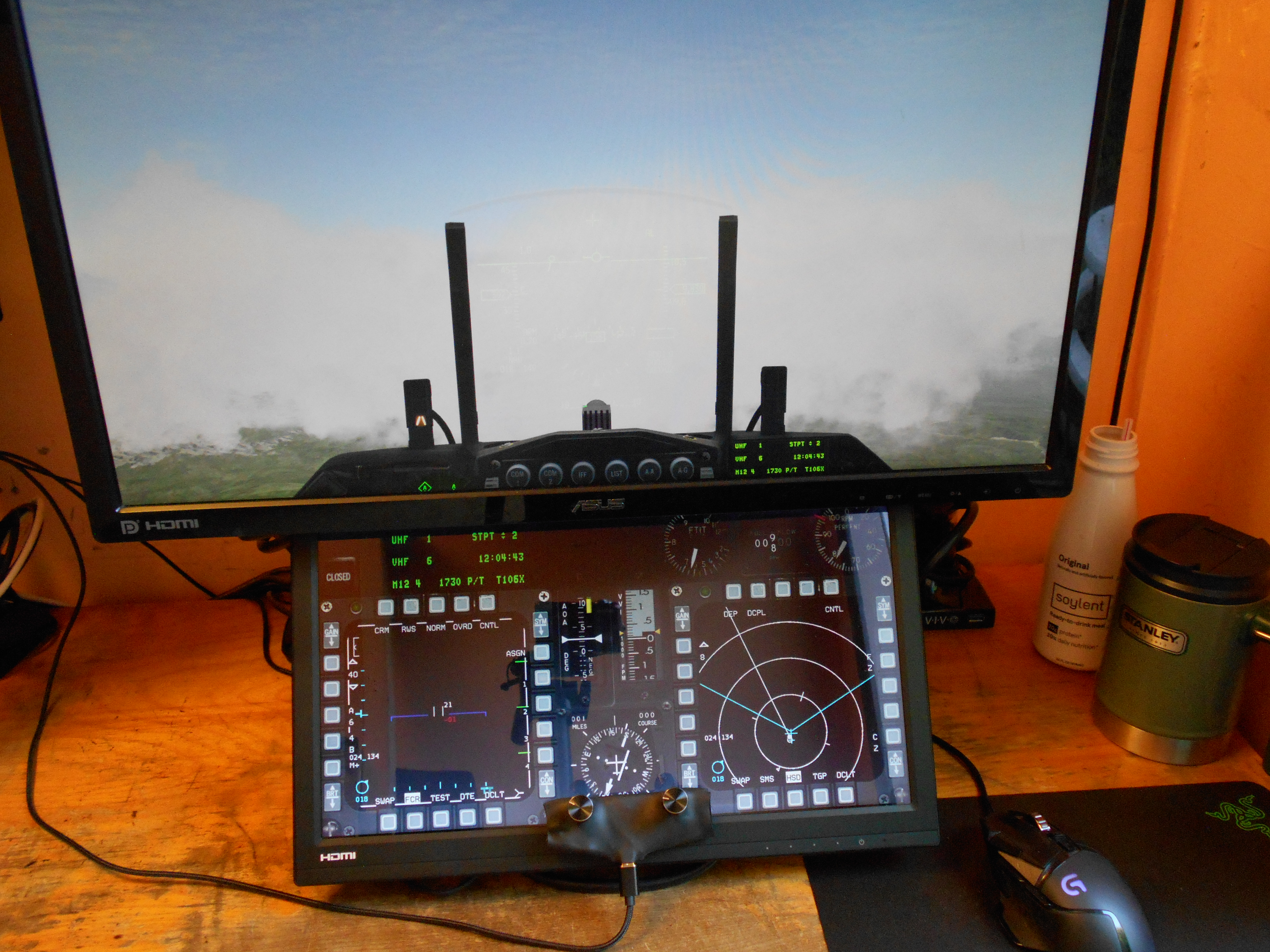 Here it is connected to the touchscreen monitor. It is far more satisfying to have tactile dials for these knobs than trying to make little circles on the screen with my finger over the touchscreen dials. The micro-suction tape keeps it in place and actually has some grab when trying to pull it off the screen. I've started using a peeling action but I doubt the screen would ever have problems.  I might get a 3D printed case someday and maybe even a 90 degree angle connector so the cord goes back behind the monitor naturally instead of downwards, but for now, it's done and working great.

Turning the dial with the most basic rotary encoder sketch from that Arduino library results in a "one degree per detent" meaning one turn is one click, and one click is one degree. No matter how fast you turn it, with 20 detents per 360 degrees with these encoders, it would take FOREVER to turn the dial from heading 000 to 180!!

I wrote two separate jump speeds to detect how fast the dial is being turned, one jumps 18 degrees per click, and the other 30 per click. Now, it's easy to twist the dial fast to get it spinning fast on screen, while also being able to dial in one degree at a time when needed.  All in all, it was a fun project and it's made me think seriously about getting a 3D printer someday to make little plastic cases for things like this.

Here's the code if someone wants to use it (or modify it to make it better):
Rotary Encoders HSI Course and Heading Knobs.ino for Arduino IDE
https://pastebin.com/drUnCfKN

(Not taking into account things like double sided sticky tape, solder, wires, or shrink wrap tubing segments used because they cost less than a few pennies)

I spent a fair bit more money than I initially expected to (almost $55!), but much of that went towards components or materials that I'll be able to use for several projects in the future.  At about $14 bucks, it is twice what I thought it would be per unit, so that will help me to better gauge other ideas.  It seemed like it would be cheap as dirt, using many parts I already owned, but it all adds up - they don't sell less than a sheet of micro-suction tape, and buying control boards in bulk is the only wise way to do it (if you can call 3 units "bulk", that is).


In conclusion, it was great to have an idea, play around with some proof of concepts, and then make it into a reality within a few days.  Single game controllers today.... one day, a full cockpit of switches!  Not sure what my next project will be, but among other ideas, I've considered making a custom control board for Kerbal Space Program, or maybe some kind of wireless gear that can connect to a computer and translate into RF to control some DIY RC cars or whatever with my Xbox controller already attached to my PC.  Eventually, I want to get into wireless stuff, and even RC, but I might start with button boards that use USB cables just like this one.

If anyone has any questions on this project, feel free to ask.